Banish those bingo wings for good 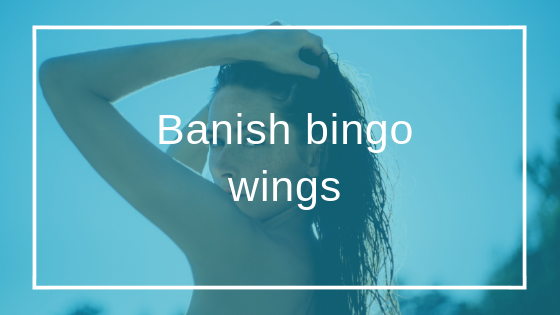 It’s a pretty unflattering term to describe the loose skin and fatty tissue that hangs under arms, but ‘bingo wings’ is a buzzword that has sadly become part of the lexicon for describing those fatty deposits that sag around the triceps.

It can be particularly noticeable when the arms are raised and then shaken, as in when calling out in bingo, hence the name.

A recent survey revealed an astonishing three in four British women are more unhappy with their upper arms than any other part of their anatomy. Some of those who responded said they felt ashamed to show their arms in public and would even refrain from waving if they could.

The problem can exacerbate with age, as the skin loses elasticity and firmness. Although men do suffer, it is mostly women who talk to us about the problem, and how they often feel self conscious, refusing to wear the kinds of clothes they want in order to hide the upper arms with long sleeved tops.

What are bingo wings?

Actually the term ‘bingo wings’ covers a wide spectrum of concerns related to the upper arms.

The classic bingo wing is caused by a lack of muscle tone in the upper arm, often in slimmer women. You may have heard the expression “Arm charms”, which stems from this, often the result of significant weight loss. It can mean there is considerable redundant skin hanging from the upper arm.

When the upper arms stores a little extra fatty tissue, which leads into the pectoral region, a bulging appearance can be seen at the axillary fold.

And, where there is excessive fat in the whole arm, this can create bulges and rolls under the arm leading to an undesirable appearance.

Whatever the type, bingo wings can trigger poor self-esteem and are enough of a worry for so many people that favourite clothes are discarded, and the issue dictates what can be worn on any one day.

A further detrimental effect occurs, given the fat is less thick and non-fibrous. The overlying skin of the medial aspect of the arm is thin, mobile and prone to sagging.

Yes and no. If you have researched lipo to treat bingo wings, you may receive mixed messages that older treatments typically remove the fat, but leaves behind sagging loose “empty” skin.

This is where Microlipo can truly save the day. The highly specialist technique is performed by Dr Puneet Gupta, one of only a handful of surgeons anywhere in the world who was trained by its creator, revolutionary US dermatologist Dr Jeffrey Klein.

Microlipo, also known as the “tumescent technique” will remove the fat and help sculpt the body. It gives excellent cosmetic results and has a rapid postoperative return to normal activities, within 48 hours in most cases.

The tiny size of the cannulas (the smallest is just 0.9mm wide while the largest is 2.3mm) allows up to 3.5 litres of fat to be removed, and their miniscule size means they are particularly effective at targeting smaller body areas, such as the arms.

The very diluted local anaesthesia is injected into the fat causing the targeted areas to become swollen and firm, and while you may think that is the reverse of what you came to the surgery for, this swelling helps separate the fat cells from the other surrounding tissue. The fat is then removed using microcannulas with a diameter less than 3 millimetres.

Traditional liposuction cannulas have a larger diameter and remove fat rather quickly, which increases the risk of irregularities and depressions in the skin. The use of microcannulas allows smoother and more uniform results, and we will work with you to ensure you can resume your normal life as quickly as possible, post-treatment.

As we explain to everyone who comes to the clinic seeking help, the best results will come from a healthy lifestyle, good nutrition and exercise, as any later weight gain will affect the surrounding areas.

If you’re suffering in silence and reaching for the long-sleeve tops in the summer, book your confidential consultation with Dr Puneet Gupta today, and soon you will be waving goodbye to those bingo wings for good.

We use cookies to ensure that we give you the best experience on our website. If you continue to use this site we will assume that you are happy with it.OkRead more